Take Your Ceiling to New Heights With Black Paint

It’s tough being a ceiling. They’re one of the most overlooked and underutilized surfaces in the interior design world. People spend a lot of time agonizing over paint color swatches for the walls of their home without paying much, if any, mind to what’s above. The average ceiling doesn’t get a lot of love––usually just a coat of flat white paint. A new color trend is hoping you’ll do just the opposite by considering your ceiling as the “fifth wall” and painting it black.

We know what you’re thinking. “Black?…on the ceiling?” It’s definitely a polarizing color trend, but stay with us. A dramatic flat black ceiling applied by a skilled painting professional may be the dramatic effect you never knew your space needed.

When You Have Too Much Room High ceilings are a huge selling point of homes. It’s something you and your realtor probably ooh and aah’d over when you first toured as a prospective buyer. Researchers have even found evidence that high ceilings––anything above the standard 8-foot height––make people feel like they have more freedom and creativity.

People were more likely to say a room was beautiful if it had a high ceiling compared with a low ceiling. So, our brains love high ceilings but they can also create some unique design challenges. A professional painting project can help make the room feel unified.

A room with soaring ceilings can feel sterile and empty if left unaddressed. Ceilings are most often painted white to reflect light, which in turn makes a room feel brighter and larger. Rooms with black ceilings can better connect what’s up with what’s down to create a cozy, intimate space.

A dark ceiling paint color like Benjamin Moore’s Midnight (2131-20) can add warmth and make your ceiling appear as if it were lower which in turn allows you to have lots of vertical space without sacrificing on coziness. Other design elements like tall shelving, long window treatments that run floor to ceiling and high-hanging artwork can further unite the room and eliminate all that abundant dead space.

Open concept floor plans are another home selling point that can make even the smallest of homes feel larger than they actually are. Eliminating dividing walls to have one single living space between your kitchen, living room and dining room allows natural light to flow freely through your home. It’s also helpful when you’re keeping an eye on active little kids or entertaining a crowd.

“Open floor plans are highly sought after, but once people move in it can take some work to figure out how to make the home work best for your lifestyle,” says Dennis Merillat, owner of CertaPro Painters® of Burnsville.“Creating a black color block on part of the ceiling is a creative way to express division of space while not losing any floor space with furniture you don’t actually want.”

Open floor plans can make it tricky to distinguish one area’s function from another when physical boundaries are absent. People usually create separation with area rugs, furniture configurations, shelving or room dividers. Instead of taking up more of your living space with clunky dividers or furniture you don’t actually love, look up for the solution.

You can use black paint to define an area. Think of it as an area rug on your ceiling. It’s a creative solution to divide up the space so you’re free to decorate however you want. Light or neutral colors work best for furnishings when going dark on your ceiling. It’s worth investing in a dramatic light fixture to showcase your bold ceiling choice.

It’s All in the (Architectural) Details 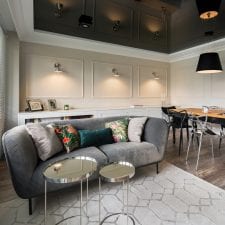 Some ceilings already have some have some distinguishing characteristics before the interior painting project begins. If you’re lucky enough to have some amazing architectural elements built into your space, a black ceiling can highlight your home’s character. For example, having black paint applied in the white space between coffered ceiling beams, millwork or crown molding can add visual interest, greater depth and emphasize the uniqueness of the details. Beamed, barrel-vault and cathedral ceilings are other good candidates for a black color scheme.

“If you have beams that create geometric shapes on your ceiling like squares or rectangles, adding black to the equation is the perfect opportunity to really make those pop and create a statement on your ceiling,”  says Dennis Merillat, owner of CertaPro Painters® of Burnsville. “Painting existing beams white and what’s around them black creates a dramatic contrast that allows each component to be noticed.”

When you want paint applied around beautiful beams or ornate molding, it’s important the application is done skillfully to protect the existing elements of your home from drips and spills. The team at CertaPro Painters® delivers meticulous interior painting project, so you can ensure the black paint gets where it needs to be and nowhere else.

Don’t feel left out if you don’t have any existing architectural elements to play off of in your current space. A black ceiling design adds architectural interest where none existed all on its own!

Ceilings That Can Hide The Basement Mess Partially finished basement ceilings often have chunky ductwork, unsightly pipes and structural bracing that you’d rather not have out in the open. An ugly ceiling is not something you want to always have to look at if you spend a lot of time in your basement. Don’t spend money on drywall that will lower the height of your ceiling. Adding your basement ceiling onto your list of rooms for a professional interior painting project is a solution to the mess that won’t rob you of headroom.

A basement ceiling painted black is great at concealing obscure stains and spots as well as all the “stuff” that is running along its ceiling. Exposed ceilings are on-trend right now. A fresh coat of black paint can help you achieve that industrial style. 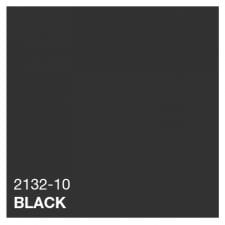 A black basement ceiling can also help with functionality for those who have a home theater concept in their basement. Black speakers and a projector can be mounted and blend into the paint color. A dark ceiling allows you to focus your attention on that night’s movie instead of on everything that’s happening above your head. Sherwin-Williams’ Caviar (SW6990) is a dark hue that can help you accomplish your basement painting goals. Or if you want to stick with the traditional paint colors like Black (2132-10) by Benjamin Moore, this will add an easily workable color scheme to whatever your design style is.

While a black ceiling can add sophistication and elegance to a room, it can also add a ton of fun to your child’s bedroom. If your child is obsessed with all-things-outer-space, think about how much they would enjoy falling asleep under a sky full of stars right in their bedroom. Have the professionals at CertaPro Painters® apply a coat of black paint to their ceiling and surprise them by adding glow-in-the-dark star decals. Sherwin-Williams’ Tricorn Black (SW6258) would make a great choice to send your little one into space. It’s a themed room that can easily be transitioned into a more sophisticated space once they outgrow their childhood theme.

We also love working black into a child or teen’s bedroom on the walls with Benjamin Moore’s chalkboard paint.

I’m Sold on a Black Ceiling! Now What?

Anyone who has ever wanted to paint a wall white has learned that there are a lot of color swatches to choose from. The same can be said for selecting a black paint color. It turns out, things aren’t always so black and white. The color consultants at CertaPro Painters® can help you navigate the sea of black swatches to find one that achieves your home goals.

If you’re looking to add a dramatic ceiling to your next interior painting project, let CertaPro Painters® help you get started. Call 1-800-689-7271 or get a free estimate today to discuss making your “fifth wall” a statement piece.