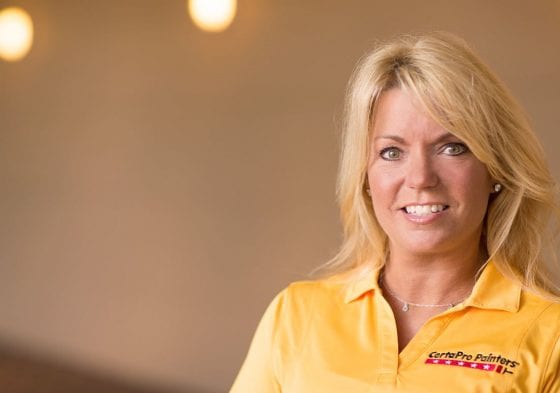 In 2005, Barbie Dorsey hired CertaPro Painters® of North Raleigh to paint her home’s exterior. After what she describes as an extraordinary experience, she found herself recommending the franchise to anyone who needed a painting company in Raleigh. Little did she know, all of those referrals would prepare her for 2012 when she joined their Sales Team as a Design & Sales Consultant.

“Before joining CertaPro Painters®, I worked for a Commercial Developer/Commercial Design Company, and my project at the time was ending,” says Barbie. “The franchise owner approached me with an immediate need for a residential sales position. It felt like the right time for me to make a move, change up my path, and join his Sales Team.”

Barbie quickly found success within the company. A year after she was hired, she earned the national CertaPro Painters® Residential Pride Award. Three years after receiving that honor, she switched from the residential team to commercial sales, a role in which she was highly experienced since she previously owned a residential design business and assisted in the commercial design build of an Executive Class A Space.

Eventually, Barbie decided she wanted to make the transition from team member to franchise owner. Despite having to work longer hours, Barbie was inspired by the freedom and flexibility that being a business owner grants a person. As luck would have it, a CertaPro Painters® territory opened up in Wilmington, NC, in May 2019. Barbie jumped at the opportunity and moved from Raleigh to Wilmington to pursue her dream.

“My daughter has been my biggest cheerleader throughout my career and was right by my side as I decided to move into business ownership for myself. So was my previous employer, business mentor, and friend, Kirt Storch. Kirt is the owner of CertaPro Painters® of North Raleigh, NC. He has always believed in me, supported me, and respected me for being a woman in this field. He had enough belief in me and my skills for the both of us.”

Being a woman in a male-dominated workforce has proven challenging for Barbie on many different levels. Barbie says confidence is key in succeeding in this industry.

“My biggest obstacle is myself and having doubts about myself. Over the past several years, I have experienced many career transitions and lots of personal growth. But I have learned that to be successful, you need to have the courage to own who you are, know why you are doing what you do, and figure out how to apply your vision to positively impact others – whether that’s with your own staff, your crews, or the customer.”

Though there are challenges, she encourages anyone who wants to start their own business to do so, especially with CertaPro Painters®.

“You’re buying a business model with processes and systems that work. Follow the program because it’s built for your success. Also, the network of people you have from corporate staff to other franchisees means you’re never alone.”

She gives other aspiring female business owners the same advice she gives herself every day: learn to reach out and open up when you need guidance or want to revisit best practices. Have resilience, focus, and decide what’s important. She says being a business owner is super fun and rewarding when you get to watch your customer stand back with satisfaction. It’s during those moments you realize you and your team brought that vision to life.

Now that she has been operating her own franchise for over a year, Barbie looks forward to building up the residential CertaPro Painters® brand in her community. She hopes to transform local landmarks, beach community areas, multi-family living spaces, and commercial image spaces.