Paula Murray’s Passion for Training, Sales, and Operations Led Her to CertaPro Painters® 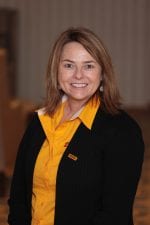 One simple word started Paula Murray’s career – “sure.” After graduating from Boston College with a degree in Economics, Paula was looking for a summer job in Faneuil Hall (a marketplace and meeting center in Boston) and applied for a part-time retail sales position to fill her summer. Those plans quickly changed when at the end of the interview, the hiring manager asked her if she would like to instead be the Assistant Manager.

Saying “sure” to this position led to years on the retail sales floor and culminated in becoming the Director of Store Operations. In this role, she ran store operations, communications, and training and developed her passions for growing people, sales, and processes to support those sales.

After a decade doing what she loved — right place, right job, right people — Paula’s husband Dante received a promotion opportunity that they could not refuse and would uproot their lives, taking them to Pittsburgh.

With two young children at the time (her son Zachary was 6 and her daughter Emily was 4), Paula decided to get her family settled in their new city. She met friends and neighbors, took up tennis, and worked as a consultant in sales operations, hiring, and training.

“I was fortunate that most of my clients were folks that I had worked with throughout mycareer,” says Paula. “I could deliver them everything from candidates to conference sessions to handbooks and training programs from my new home in Pittsburgh.”

One of her final consultant roles was with a software company in Pittsburgh where she was hired to fill an administrative role and in the process, wound up being offered a permanent position in Sales Operations and Marketing.

“I learned so much in this role and developed technical skills that were just missing from ‘the stack’ (tech pun!). I engaged with software engineers, participated in ‘stand-ups’ and ‘scrums,’ piloted collaborative software, and made sales presentations to huge restaurant chains. What could be more exciting?”

Paula worked with this company for five years, but it was during this time, she realized how much she missed B2C. Her B2B role was exciting and challenging, but she missed the customer, building direct relationships, and seeing the smiles firsthand.

From Sales and Marketing to Professionally Managing a CertaPro Painters® Business

During Paula’s first contact with the CertaPro Painters® franchise development team, she was impressed by the strong foundations that existed in the company’s sales, training, and marketing departments. Fast forward to April 2019, Paula and Dante started operating the South Hills – Pittsburgh CertaPro Painters® territory.

“I could sniff out a fake. I knew these guys were the real deal in terms of process and commitment to people and training. I was also impressed by the caliber of franchisee that CertaPro Painters® was attracting. In my discussions (of which there were many!), they all proved to be accessible, transparent, and smart. Every conversation ended with some variation of ‘If you wind up buying, you now have a resource. Please reach out.’”

Now, at 54 years old, Paula can say she genuinely has a new group of friends. From the people she met while researching the CertaPro Painters® franchise to attending conferences, training, and forum groups, Paula has found support and guidance (and laughter!) from other franchisees and essential business partners.

Female Entrepreneurs Should Trust the Process

When it comes to starting your own business, Paula says it’s easy to go in and think you can do it better. While in some cases, you might be able to, someone else has probably already done it pretty well.

“When I first entered the painting industry, some of the painters might have known that I didn’t know a damn thing about painting, but I am a quick study and more importantly, I quickly learned about my painters — not just about their expertise or equipment — but about their families, goals, and favorite foods! It really wasn’t long before they realized how much Dante and I cared about not just our new company or our new clients, but how much we cared about their success.”

Paula has found herself in both female and male-dominated industries. She navigates her business decisions by trusting the process and creating one if it isn’t there, asking for feedback, doing what she says she will do, and always thanking people for their help. She also believes it’s important to go beyond your job description, offer to fill in the gaps, and never stop asking the very simple question, “What else can I do?”

“The franchise community is strong, and at CertaPro®, the corporate support is equally as strong!”

Success Is In This Business Owner’s Blood

It seems like Paula was destined to be a successful entrepreneur. Her great grandfather was Thomas E. Murray, an American inventor and businessman. He worked alongside Thomas Edison developing electric power plants for New York City and many electrical devices that influenced life worldwide.

Along with success, nurturing is also a part of Paula’s DNA. This quality translates to her helping her team navigate processes and connecting them with other resources so they can achieve their professional and personal goals.

“Use your strengths. Mine are networking, listening, and building relationships. No matter what industry I have been in, I’ve always been interested in adding value to as many parts of the business as possible. What’s more fitting to those qualities than being a business owner?”