For the first 20 years of his professional life, Oliver Guminski built a solid career working in New York City’s financial industry. “I was a stock and bond trader covering institutional clients in Europe,” explained Guminski, 54, a native of Germany who came to the U.S. in 1991 and moved to Colts Neck with his wife and two children in 2005. 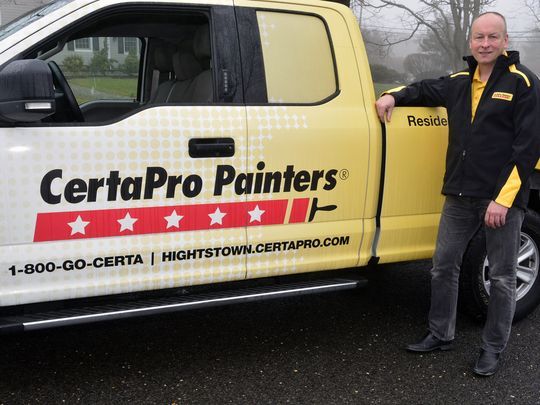 But as the industry began consolidating, the conditions of Guminski’s job – and life – soon changed.

“I had to commute to London and had a small apartment there,” he said of the transatlantic “commute” he endured from October 2010 to May 2015, during which time he returned to New Jersey every four to five weeks for two to seven days at a time.

“While it was a good opportunity,” he acknowledged, “I didn’t want to live there permanently or move my family there and ultimately told my wife that I needed to come home.”

Once back in Colts Neck, Guminski began looking for jobs in his field but found that the opportunities remained in Europe, “so I considered buying a business instead and met with a franchise consultant,” he said.

“In addition to helping me understand how franchises worked, the consultant suggested different businesses that would be ideal for my background and personality and CertaPro Painters® kept coming up as a top opportunity,” Guminski said of the 25-year-old franchise which specializes in interior and exterior painting of residential and commercial properties as well as related services such as power washing, light carpentry, kitchen cabinet painting, and sheet rock repairs.

After researching CertaPro Painters® and meeting with its representatives in the fall of 2015 – “everyone I met there was very professional with a strong work ethic and other franchisees that I spoke to were very complimentary of the corporation,” he said – Guminski purchased an existing CertaPro Painters® franchise in Hightstown that covered Mercer County and parts of Monmouth and Burlington counties.

“I love being in control of operations and being able to adjust things in the best interests of the business, and I also really enjoy dealing with customers, especially face-to-face,”

The following October, having grown territory revenues by 55 percent over the prior year, Guminski expanded by purchasing a second CertaPro Painters® franchise in Freehold (covering Freehold, Colts Neck, Marlboro, Englishtown, Manalapan and Farmingdale) from an owner who wanted to sell.

In all, “we now have a total of five crews, with each crew averaging three to four painters, and we’re recruiting as we come into the spring/summer season,” he said.

While his orientation necessarily involved in-depth training in the painting arena, “from my own background, I already knew how to build strong customer relationships, service often-demanding clients, and keep them happy, satisfied and coming back,” Guminski said.

At the same time, he noted that CertaPro Painters®’ business model, training and support helped ease that process. “CertaPro Painters®’ commitment to delivering an extraordinary customer experience by being on-time, clean and respectful helps reduce customer anxiety and offset the often-negative perceptions people have of contractors,” he said, “and we coach all of our recruits to embody our core values.”

“We saw a CertaPro® advertisement last summer and hired Oliver and his team to paint some of the common areas in our house, including our foyer, family room, and hallways,” said Millstone resident and office equipment business owner Billy Hanson of the positive customer experience he had. “I liked that Oliver came out himself to meet us and prepare the estimate; he was also very accommodating and easy to communicate and work with,” Hanson said.

Of the several-day paint job completed, “the quality was very good and the team was trustworthy, quick, clean and courteous and even came back to do a touch-up that we requested and didn’t charge us,” he said. “They’re a very professionally-run company and they were great to deal with.”

Among trends in the painting industry, Guminski noted that gray tones have become extremely popular for home interiors and that paint formulas have evolved such that paints dry faster and emit less of an odor than ever before. “Regulations have also gotten stricter in terms of the use of volatile organic compounds (VOCs) in paints and manufacturers are increasingly complying with growing customer demands for low or no-VOC paint,” he said.

While Guminski acknowledged that the seasonality of the painting business in this area can be challenging, especially in winter months – “I stress about keeping our crews working all year long because they’re family,” he said – he’s currently addressing that concern.

“I’m hoping to expand into more commercial work such as offices and hospitals to reduce the seasonality a little bit,” he said, adding that recruiting the right associates at the right time is also key to his growth strategy. “In the beginning, I did all of the sales, marketing and production management myself, but I recently hired an office assistant and a residential sales associate, both of whom will enable me to focus on other areas, such as developing our commercial business,” he said.

Looking ahead, “I hope to build a large painting business with a lot of happy, repeat customers and employees who love to come to work – maybe even a business my children will get involved with someday because it’s a great environment,” said Guminski, a self-described ‘risk-averse’ individual who’s happy to have been presented with this unexpected career opportunity.

“I love being in control of operations and being able to adjust things in the best interests of the business, and I also really enjoy dealing with customers, especially face-to-face,” he said. “A great paint job can transform a house or business and I always love to see the finished product and how happy it makes our customers.”

While he works so much these days, Guminski is also relishing the opportunity to be back where he belongs, spending quality time with his family. “After years of transatlantic trips,” he said, “I love being home.”