Twenty-five years. The years have sped by at a pace that feels like the complete antithesis of watching paint dry. Where CertaPro Painters® started couldn’t be farther from where it is, or better yet, where it is going. 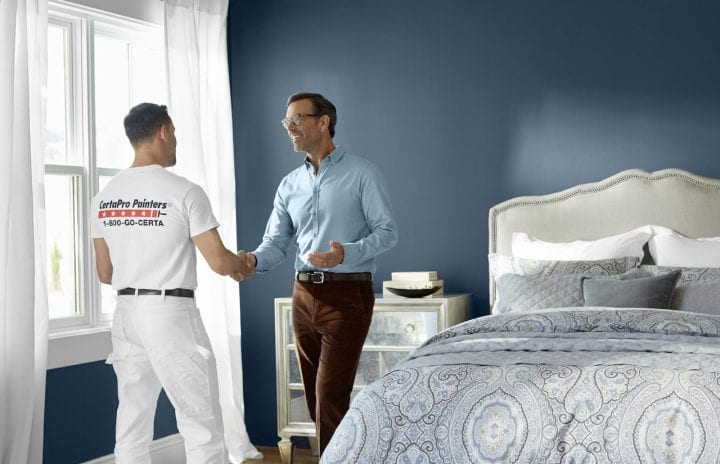 As it celebrates its 25th anniversary in 2017, it’s easy to see how CertaPro Painters® has developed one of the most successful franchise models in the industry with 375 locations. It comes from the leadership at the corporate level, and CertaPro®President Michael Stone has a lot to do with that.

It may seem hard to believe, but CertaPro Painters® began with a group of visionary entrepreneurs who forecasted the potential for a year-round residential painting business. With some of the group in the States and some in Canada, they embarked on a journey with a common sense of purpose, culture and core values.

“Painting is a $40 billion a year industry, and we are just 1 percent of that market share,” Stone states. “When one looks at the opportunities available for starting a franchise with us, its easy to see the prospects for growth.”

In the early 2000s, that small group of entrepreneurs prospered into more than 100 franchise owners backed by a 30 member corporate team. The culture was strong and the values were stronger. The preliminary dream was now certain and CertaPro Painters® had blossomed into The Brand of Certainty.

The Certainty was a reflection of their people – the family. The CertaPro® Family. This kinship is not to be taken lightly and there’s nothing cliché about it. If you are fortunate enough to be invited in, you can guarantee to be supported, to be held accountable, to set lofty goals – and hit them, and to have immeasurable pride in their world-class brand.

That support structure at CertaPro® allows for franchises to grow and flourish within their selected markets. Starting a franchise or buying one from another owner takes hard work and dedication and CertaPro® sets the bar high.

“I’m always amazed when my husband returns from a conference. It’s because he has had an opportunity to review challenges and road blocks with his peers, and without a doubt, someone has faced that challenge and offered support.”

Dominic Ventresca owns a successful franchise in the Buffalo/Niagara area of New York, and appreciates that support. “System-wise, when you start out, you really need a lot of support,” he explains. “When I first began, I had a regional manager work with me, and then an operational manager as well. It made a huge difference in helping me grow the business.”

As you’d expect, that support comes in many forms. From annual conferences where franchisees can share best practices to training and skill development programs, CertaPro® franchisees live one of the core values of Practicing Continuous Improvement. “We are rigorous and disciplined, we want people who are willing to share,” Stone states. “In school, if you copy your work from the best student, you will get into trouble. In franchising, if your best performers share their best practices, it creates wealth. That’s franchising at its finest.”

“I’m always amazed when my husband returns from a conference,” says franchise owner Paige Nejame, who operates a CertaPro® in the Boston area. “It’s because he has had an opportunity to review challenges and road blocks with his peers, and without a doubt, someone has faced that challenge and offered support.”

The second decade of the CertaPro® brand substantiated their quest to deliver Certainty in a world of little to no certainty. CertaPro Painters® was proven because of their systems. It was trusted when seen on TV and heard on the radio. They were experts in their field fueled by unmatched passion. And they epitomized professionalism, which was seen in the results in of their customer feedback. Their family was growing by the hundreds in territories and by the thousands in those at the forefront of the brand, their painters and associates.

Today, CertaPro® Painters is on The Path to becoming a household name, with sights set on $1 billion and reaching top of the class in brand experience. The family is rooted not only in culture and values; but, even in color. Gold embodies more than the color of their shirts. It’s the gold standard. It is representative of their vision to Consistently Deliver Extraordinary Experiences® for their customers, their franchise owners, their associates, their painters, their staff, and their vendors; simply, everyone who touches their brand.

The Path, is actually a guidebook on how to grow a new franchise into a thriving operation in one to two years.  “When I started, I was only 22,” Ventresca states. “I didn’t know what I didn’t know. The Path served as a model as to when to hire someone else, and when to look for certain skill sets that I didn’t have.”

“One of the concepts of The Path is to have franchises, at least when they start out, focusing on residential work instead of commercial work,” Nejame says. “Once a consistent cash flow of residential work occurs, they are free to pursue commercial opportunities. This works well for franchisees as well.

“For us, it was great to start out with residential because the customers are pickier.  You really learn how to attain a high level of customer satisfaction before branching out.”

In celebration of their silver anniversary, CertaPro® will continue to live true to their values: Deliver What They Promise, Respect the Individual, Have Pride in What They Do, and Practice Continuous Improvement. They have a legacy to leave of which they will be proud. This journey was a dream of a small group of entrepreneurs. The execution and future lies in the hands of them all. And according to Stone, the company’s strong leadership and culture of support give it a solid foundation for that growth.