CertaPro Painters® of East San Diego/Poway offers professional interior and exterior painting services to the Tierrasanta, CA service area. In addition to interior and exterior painting services we offer several home improvement services including staining, cabinet repainting, color consultation and stucco repairs and painting. If you’re interested in our services, the first step is to request a free estimate either by filling out the form online, or by calling us at 858-859-4155. Check out our Google Reviews! Tierrasanta, Spanish for "holy land," or "holy ground", is a community within the city of San Diego, California. The symbol of Tierrasanta is an encircled Conquistador cross, similar to one atop Montserrat near Barcelona, Spain, though it no longer holds any religious meaning.

The residential development of Tierrasanta began in 1960 when the federal government declared a portion of Camp Elliott, a Marine Corps training camp, as surplus. The City of San Diego adopted the Elliott Community Plan in 1962 to guide the initial acquisition of property for public uses, such as street rights-of-way. Much of the property was then privately developed from the 1970s through the 1990s based on the updated Elliott Community Plan, adopted in 1971. The military legacy of the community still exhibits a strong presence, such as the 2,321-unit Murphy Canyon Naval housing development, which accounts for approximately one-fifth of the total dwelling units in the planning area. Excellent. Even though we had hoped they could have made it a week sooner - they called and said they had fallen behind and would arrive the following week. They did not disappoint us; they were on time and finished earlier. This is the second time we’ve used the CP painters, and we also recommended them to our friends - who like them too…

See below for examples of painting projects we completed in the Tierrasanta service area. Click on the links to see the photos up close. You can also view our complete portfolio for more examples. The details of this house are what makes it charming to the point that painting it a basic shade of white is all thats needed. This house is made inviting by featuring a very light tan color choice paired with white trim. 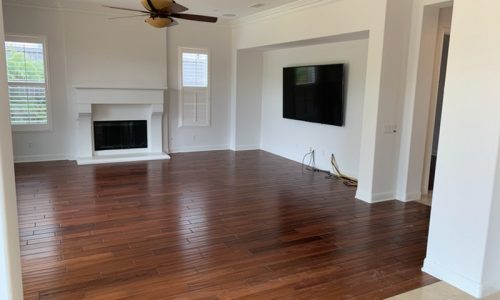 A Living Room painted for flexibility

We painted this large living room to be a bright contrast to the dark floors. This is a combo that can support any decor. This home's classic mid century modern look provides all the curb appeal while the white exterior keeps it simple.

They did an excellent job, they were very nice and a pleasure to work with.

Below is a list of all the residential painting services we offer to the Tierrasanta service area. Click any of the links below for information about a particular service. Your cabinets are perhaps one of the most touched surfaces in your home, so it’s no surprise that they wind up with a little wear and tear. At CertaPro we’ll work with you to find a paint that meets the needs of your home and daily routine. Whether your home has water damage that requires drywall repair or your walls have medium-to-large holes that need patching, the CertaPro crew will patch, sand and prime, to create a flawless surface to paint on. At CertaPro Painters® of East San Diego/Poway we are EPA Lead Certified. This means that if we are performing a renovation, repair or painting project that disturbs lead-based paint in your home, we use certified renovators who are trained by EPA-approved training providers and follow lead-safe work practices. At CertaPro we offer a variety of interior and exterior home painting and staining services, including your home’s deck and fencing. Regardless of the room inside your home that needs an update or the area of your home’s exterior that needs protection from Mother Nature, our team works with you to determine the best plan of action for your home. Power washing is a vital step in painting the exterior of your home. CertaPro uses the process to remove mold, oil and old paint so new paint absorbs into your surface better. As with any other home exterior, it’s important to maintain the stucco or EIFS (also known as synthetic stucco) covering your home. The CertaPro team is very knowledgeable in both repairs and painting related to these two materials and will work alongside you to determine what services your home needs. It was a great experience, it was excellent they did a really great job.

The Most Trusted & Referred Professional Painters in Tierrasanta, CA.

We Perform the full range of house painting services in Tierrasanta.

Read what our customers say about their house painting experience.

We have completed thousands of painting projects, many in your neighborhood, most likely for your neighbors. Read our unedited and unbiased Customer Reviews and see how much our customers love us.

Of course! See our portfolio for examples of our craftsmanship, the best of all local house painters. We’ve probably painted a house on your block!

Meet who will be coming out to your home.

You’ll be meeting with one of our seasoned paint estimators, familiar with the architecture and challenges of painting homes just like yours. They will create a written, detailed proposal specifically for you. As for our top-notch crews , we only hire career painters who’ve shown a commitment to their craft and a focus on customer care.

So, how much will it cost?

The exact figure will depend upon a number of factors and we’ll need to discuss your painting project in person, but LESS THAN YOU MIGHT EXPECT!

We look forward to meeting with you, performing a professional evaluation, and answering your questions. Then we will write up a proposal based on your home’s unique needs. We’ll even discuss payment/financing options before we leave!

So, are you ready to get started?
Schedule your free, detailed painting estimate now!

Have a look at some of the other local areas we serve!