Meridian Street United Methodist Church was the first Methodist church in the city of Indianapolis starting in 1821 and known as the Wesley Chapel. The building that stands today was finished in 1952. CertaPro was called out to provide a quote on the exterior of the church as well as the interior of the church’s sanctuary and chapel.

The painting was to be done as part of a Bi-Centennial celebration of the church’s congregation. The interior painting of these areas was last completed 25 years ago, and the exterior painting being done once since then.

The exterior of the building contained lead paint and required EPA standard lead protocols be followed. Most of the painting on the exterior was done on heights ranging from 20ft. – 120ft. and required the use and operation of the appropriate boom lifts to safely reach all surfaces. The surfaces that were painted included soffit, windows, columns, doors, sign lettering, and railing. CertaPro also painted the Chapel Cupula and Sanctuary Steeple which was accessed by using a limited 135 foot straight boom lift.

The interior painting also offered height and problem-solving challenges paired with the required expertise to paint the original ornate woodwork. The interior spaces that were painted included the sanctuary, chapel, associated narthex and balcony areas as well as the connecting hallway. The surfaces in these areas consisted of the walls, ceilings, doors,
woodwork, windows, and pews.

The large sanctuary had ceiling heights of 35 ft. and would require the use of ladders and scaffolding. Because of the time it takes to move around, as well as up and down these pieces of equipment, this project was slated to take an extensive amount of time to complete from start to finish.

At the onset of the project, CertaPro identified an opportunity to bring in an Atrium lift, that would enter through the Narthex and travel down the narrow hallway of the Sanctuary. By only having to remove a handful of pews, CertaPro was
able to vastly increase production on the project by utilizing a lift that could reach 80 feet in any direction, minimizing the disruption and cost that would have been associated with the removal of significantly more, if not all pews. The Atrium was then able to be moved through the hallway to the Chapel. All products used on this project were premium Sherwin Williams Emerald or similar level paints.

CertaPro’s ability to problem solve the possibility of using the Atrium lift on the interior and figuring out how to get the equipment into the church provided the customer with the most cost effective and efficient use of their budget.

Working with an out of state contractor that was recommended by the Church to have all organ pipes removed for painting reinstalled once completed.

Due to the large size of the building and it’s difficult to reach surfaces, lifts and scaffolding were used to get crew members safely into a position where they could make repairs and paint surfaces. Scaffolding to reach details high up

After completion we walked around the building and took photos of each area of concern that were noted at the beginning of the project. It all looked brand new again! Sanctuary in the church 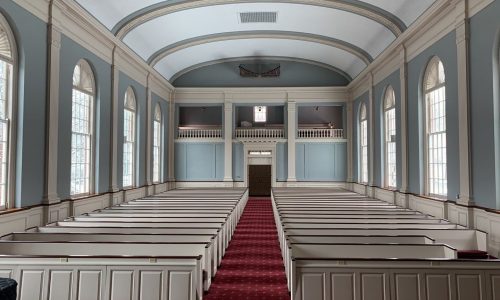